The roofs of the Cathedral of Palermo 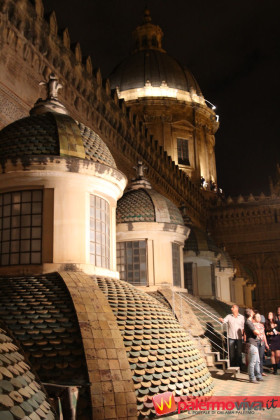 From a door, inside the Cathedral of Palermo, you access a scaled-down staircase, like an old house, which enters you into a charming as unexpected place, these are the roofs of the beautiful Cathedral. You have only to be enchanted, a large terrace, majolica, long and wide with a series of domes, which are nothing more than skylights of the Church, covered with semi-circular majolica, green and white. From a staircase to the iron railing you can take another corridor outdoors where you can admire even more about not only these beautiful domes, but the whole Piazza and the roofs of the houses of Palermo. After finishing the open path, you enter a doorway inside one of the four towers, just the one that stands beside the porch of the Church, the one we all admire for its elegance and its double Gothic window windows. 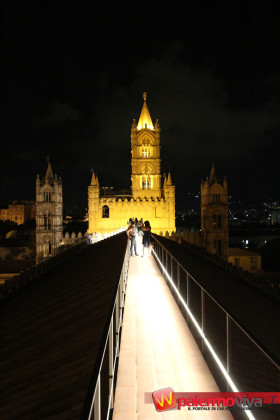 A spiral staircase with a little hoarse that rises up and goes up to the roof. A “Door to Heaven” has been called this guided tour, and it is right near the sky you feel you are. Can you dominate all of Palermo? At night you see all the lights of the city shining in the dark and a beautiful feeling of immense grandeur invades you, in the day you can see all the domes of the various churches, distinguish the theaters, individuate the villas, the Royal Palace, the Cala di Palermo. But what’s extraordinary is not just the panoramic view, but the privilege of being able to see closely and from another angle the architectural wonder of the Cathedral. What else to say? Go visit them and you will certainly experience other beautiful sensations.

Itinerary Palermo from above

Albergheria button heart is today Ballarò’s historic market. Amongst the various alleyways of the market there are the workshops of the masters, themselves excellent containers, carrying infinite anthropological facets, gastronomic fascinations and kaleidoscopic colors of the Arab suk. The path continues through the Monumental Complex of Santa Chiara, which emerged as a cloistered convent in the 14th century, is reconfigured for centuries, preserving still fascinating historical artistic traces, including a large piece of Punic walls inside the Salesian theater , dating from the 5th to 6th centuries. C. are a further testimony of the multi-legged complex of ancient Panormus. The church of San Nicolò albergheria is the ancient parish of the district, located in the upstream part of Ballarò square. Going up to the Tower of San Nicolò you will discover the most beautiful panorama of the old city, a significant monument from which you can admire the whole old town from above: the ideal place where yesterday’s majesty and today’s irrigation merge wonderfully! Crossing the market you reach Carmine Square, a large irregular enlargement, dominated by the great dome symbol of the magnificent baroque church and the convent of the Carmine Maggiore church. The dome is the most beautiful in Palermo, visible from every part of the ancient city. It is set to the spectator’s view. Inside the church there are valuable artistic artefacts from the 15th to the 19th centuries, including a painting by Novellli and Tommaso De Vigilia. Particularly fascinating are the tortilla columns made in 1683 by Giacomo and Giuseppe Serpotta, which draw inspiration from the well-known Bernini canopy. The majesty and grace of the Serpotta embodies in a golden mantle with decorative motifs, in which, in a wonderful microscopic universe, scenes from the Virgin and Christ are told. Carminello’s oratory was built at the end of the 15th century with aristocratic funding and for centuries it was a Carmelite oratory that gathered for prayers. Until a century ago it was used as a cemetery, as can be seen from the crypt below, to the exclusive use of the brotherhood. It contains some stuccoes by the great Giacomo Serpotta (“The Nativity” and “The Rest in Egypt”) as well as stuccoes by Giovanni Serpotta. Externally the compact size of the oratory and the simplicity of the tufaceous stone façade, where only the sober cornices of the windows and the portal emerge, do not reveal the decorative richness of the interior. TIMES: 4h / 5h COSTS: individual participation fee € 10,00 ITINERARY: Monumental Complex of Santa Chiara / St. Nicholas Church at the Albertberg / Church of Carmine Maggiore / Oratorio del Carminello.